Chinooks FC is a club committed to promoting excellence in the education, character and physical development of youth soccer players in the Calgary region. We provide a safe, secure, predictable learning environment where exemplary coaches instil the qualities of leadership, teamwork, perseverance, dedication, loyalty and fair play into players. We encourage our coaches to facilitate player learning, rather than imposing restrictions and strict tactics on our players and strive to constantly improve our Club football knowledge base through education and employment of outstanding technicians to offer the best football learning environment to our players. These values are tested and strengthened during competition where our players learn to cope with success and failure and to be humble in victory and proud in defeat and understand that athletic competition is preparing them for the ultimate competition: life. 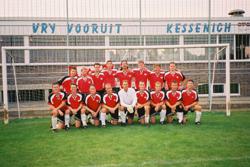 The Chinooks FC is a non-profit organization that is run by a Board of Directors elected annually by members at the Annual General Meeting. The club was established in 1974 as one of the six zoned teams in the city along with the Blizzards, Eagles, Eastside, Celtics, and Foothills. Initially, the zoned teams were for the Under 16 and 18 Boys categories while the communities managed the younger age groups. In the late 1970’s, CMSA added a Under 14 Boy’s programs followed by the introduction of the Girl’s program.
The club grew exponentially during the 1980’s and 1990’s with the addition of adult programs in Men’s and Women’s leagues, supporting 24 teams with over 400 members parallel to the growth of the city.  In mid-2000's, CMSA decided to lift the zoned restrictions allowing players to play with any club in the city.  In 2006, the club formed the Under 10 and Under 12 programs.
Today, Chinooks continues to support the city with programs from the Grassroot level (ages 4-6) to the youth (ages 7-19) and adult (ages 19+) levels. The heart and soul of the Club centres around the community with a plethora of volunteers giving their time to provide a vital community service by managing and coaching youth age groups, from Under 6 to Under 18 supported by their families and friends.
Chinooks FC is committed to providing organized opportunities through the sport of soccer for its members. We provide a variety of year-round development programs for players, coaches, and referees. Chinooks FC is dedicated to creating an environment where our members feel free to contribute their views free from judgement and a place where people are excited to participate and trust in each other to achieve the best outcome for the members and club. Chinooks FC recognizes that continuous club development is an important aspect of making sure our members are getting the best experience possible. We currently employ a professional staff member to oversee and coordinate the development of our programs.